Racing this years Vegas to Reno is father and son team Jason and Josh Cobb (18), the youngest Vegas to Reno winner in the TrophyLite class, racing Safecraft’s #6066 (TrophyLite class 6000). Josh is sitting 3rd in points for the 2017 TrophyLite Championship and is in a good position to challenge for the title. After last year’s solo trek and win, Josh will be sharing driving duties with dad, Jason Cobb, veteran racer and coach.

“The #6066 Safecraft truck has never been better and we are going to run this race harder than we did last year,” said Josh Cobb. “We will leave nothing on the table to bring home another win.” – Josh Cobb.

“I have a lot of pressure on me this year,” said Jason Cobb. “The kid did it all alone last year when I was battling cancer and brought home the win. I need to make sure I don’t hold him back.” – Jason Cobb. 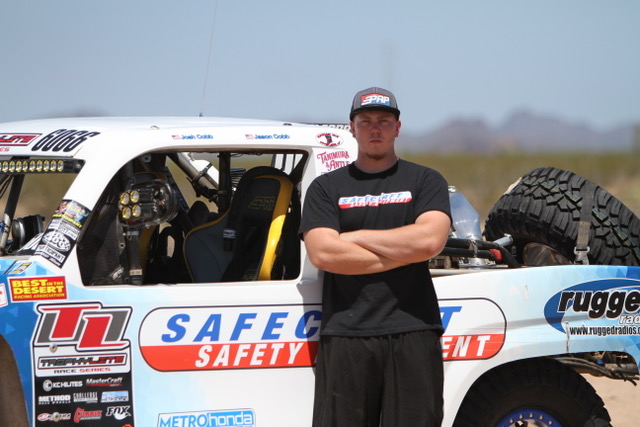 Starting his racing career at 5 years old on a 50cc quad, Josh quickly moved on to motorcycles and ended up winning his first race ever at the BooKoo Arena cross series. He was invited to the KTM Jr. Supercross at 7 years old at Chase Field in Phoenix, AZ and in 2014, at 14, he made the switch to four wheels full time and has not looked back. Josh has accomplished some amazing things in just a couple of years of racing.

For 2017, Josh will race in the WORCS Series, Best in the Desert, SCORE International, SNORE Series and Terracross. Expect great results and an extremely bright future in racing.

Jason Cobb began his career in 1988 racing quads in the southwestern desert. He raced ATV’s because at the age of 18, he couldn’t afford to participate in the coveted and expensive car and truck classes he dreamed of driving as a youth growing up in Parker, AZ. He quickly enjoyed victory on the ATV’s but yearned for a greater challenge. He exchanged 4 wheels for 2 and began his motorcycle racing career. Jason’s success was immediate; in less than 2 years, he won the Arizona Triple Crown by holding the #1 plate in Whiplash’s Desert, GP and Stadium Warz series. Jason revered in his accomplishments racing motorcycles, but continued to covet the off road race cars and trucks.

Late in 1993, Jason’s dreams came to fruition when he was invited to drive a Class 7S truck in the SCORE series. He was asked to drive in the Parker 400, his hometown race that provided the inspiration for his racing dreams. Jason won his class by more than 30 minutes, which launched a very successful career in off road racing. He went on to his second win in San Felipe, Mexico by more than an hour ahead of second place. Jason now enjoys racing with his son and teaching him how to be a champion. The two have become quite a dynamic duo.

Follow the Safecraft team during the race by visiting www.racingtrax.com, click on the Vegas to Reno race and select #976, #6120 or #6066 during this exciting event.

This website uses cookies to improve your experience while you navigate through the website. Out of these cookies, the cookies that are categorized as necessary are stored on your browser as they are essential for the working of basic functionalities of the website. We also use third-party cookies that help us analyze and understand how you use this website. These cookies will be stored in your browser only with your consent. You also have the option to opt-out of these cookies. But opting out of some of these cookies may have an effect on your browsing experience.
Necessary Always Enabled
Necessary cookies are absolutely essential for the website to function properly. This category only includes cookies that ensures basic functionalities and security features of the website. These cookies do not store any personal information.
Non-necessary
Any cookies that may not be particularly necessary for the website to function and is used specifically to collect user personal data via analytics, ads, other embedded contents are termed as non-necessary cookies. It is mandatory to procure user consent prior to running these cookies on your website.
SAVE & ACCEPT